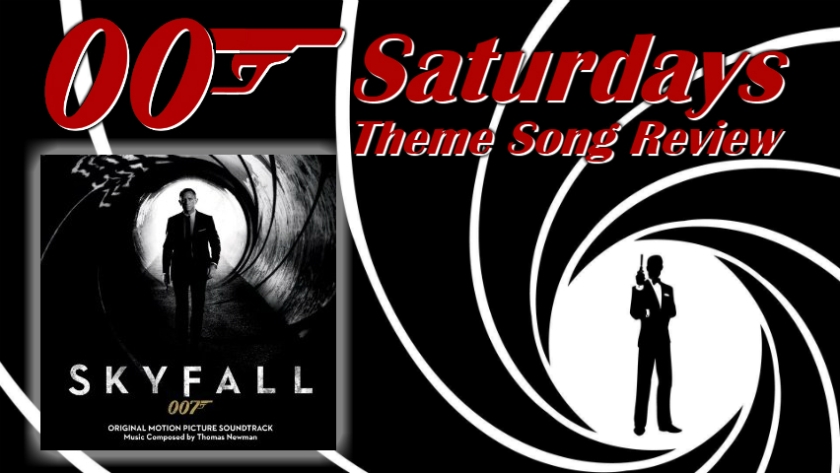 “Skyfall is where we start
A thousand miles and poles apart
Where world collides and days are dark
You may have my number, you can take my name
But you’ll never have my heart.”

It’s time for another 00 Saturdays here at Film Seizure.  This week, it’s time to move onto the music of the James Bond masterpiece – Skyfall!

Finally, the fourth time’s a charm.  “Skyfall”, co-written and performed by the massively popular singer Adele, won the Academy Award for Best Original Song.  It’s for very good reason that it won too…

Much like with “Another Way to Die”, the previous film’s theme, “Skyfall” doesn’t immediately smack you across the face as being a typical Bond song.  Instead, it opts to follow Adele’s style of music.  I think that works here, though.  It does hit a mainline of emotional impact that is extremely important for this film’s overall tone.

I will say that it isn’t really my favorite song of the entire franchise.  Do not get me wrong, though.  It is an absolutely worthy theme for the series.  It’s also worthy of its Oscar too because it does tie itself so tightly to the most successful entry in the series ever and your humble author’s favorite film of the whole bunch to date.  While I still say this is a top 10 entry for themes, it does go more for that Adele style which is not my favorite flavor of music.

And, if I do have one critique of the song, which I do also admit is unfairly laid at this song’s feet, it set a tone for the two films’ themes that follow.  We’ll be spending time discussing that in more detail over the course of these next four weeks or so.  Still…  Well done, Adele, and kudos to the overall song for capturing the spirit of the movie so well.

Well, Adele doesn’t get all the accolades for the film.  The score for Skyfall became the second film in the series to receive an Oscar nomination for Best Original Score (the first being The Spy Who Loved Me).  The honor goes to long time collaborator of director Sam Mendes, Thomas Newman.  Newman comes in for David Arnold not out of controversy, but for two very good reasons.  First, Arnold was already busy working on music for the opening and closing ceremonies for the 2012 London Olympics.  Second, as previously mentioned, Newman works with Mendes on almost every film.  Arnold knew he wouldn’t be asked, and, despite Newman wanting to be very hopeful he’d get the job without being presumptuous after hearing his friend Mendes got the job, it was mostly a foregone conclusion that he’d be replaced for any film that Mendes did.

Not having Arnold at the helm of the score isn’t a negative thing.  Newman creates a very good score.  He does make very good use of the “James Bond Theme” by arranging his own version when Bond reveals his Aston Martin before he and M hightail it to Scotland.  He even uses Arnold’s arrangement of the theme for the closing credits.  That said, it should also be pointed out that after Arnold’s version of the theme in the final credits, Newman’s piece does carry on that tradition of having a slightly more modern feel to the music.  I believe it is the same music used in the wonderful Shanghai scene in which Bond tracks down an assassin and fights him under the light from a billboard across the street.  It’s a great scene.

Speaking of great scenes, Newman is very good at giving loud, bombastic music in action scenes, and then pulling back and playing softer music, or no music at all.  Many scenes featuring our main villain, played by Javier Bardem, is underscored and it’s perfect.  It’s a very solid soundtrack and tips its hat to past scores.  It’s such a solid score that it was released without Adele’s theme on it on the track listing, though Newman would find a couple places to drop hints to that song’s instrumentals in his pieces.

Overall, everything from the performances, the look, the feel, the score…  Well, just everything about Skyfall is just about as pitch perfect as you could get in the Bond series, and Thomas Newton definitely plays a heavy hand in this achievement.

After a brief break, Daniel Kleinman returns to do the honors with the title sequence.

This is not your typically colorful sequence we’ve seen from Kleinman.  It’s dark, murky, and extremely serious.  Bond is injured.  He’s sinking to his death.  This sequence makes me think this is Bond’s hell.  He’s seeing his blood leak out in bright red while ghostly Chinese dragons attack and images of himself going up in flames.  All of this is leading him back to where he grew up and had to deal with a particular trauma that makes Bond who he is.

The lack of color and brightness may slightly hurt this title sequence as it does seem to be a pretty big departure from the past several films (particularly Kleinman’s titles), it is still very well made.  This is an ambitious title sequence to match an ambitious theme song.  It also lays out the entire inner struggle Bond has to deal with throughout the film.

Regardless of it being a little more serious, a little darker and more murky of a visual, this is still high art and something I wish films did more of than holding off until the end credits to do.

Join us next week for the fourth Daniel Craig film in the series, Spectre.