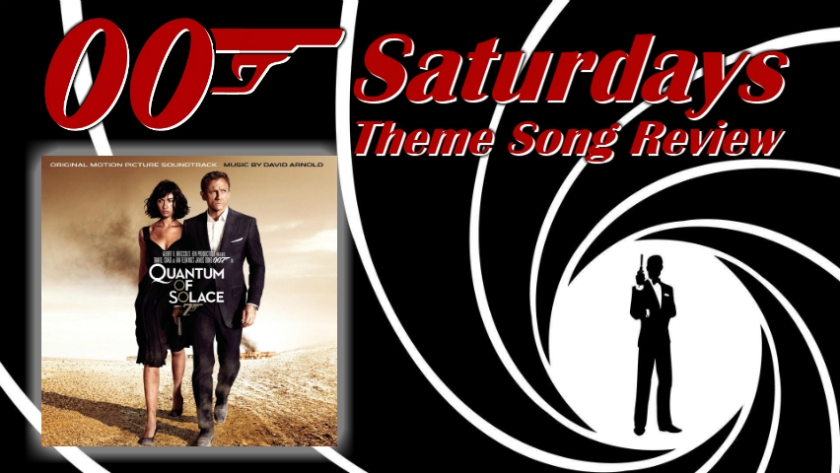 It’s time for another 00 Saturdays here at Film Seizure.  This week, it’s time to move onto the music of the second James Bond movie for Daniel Craig – Quantum of Solace!

The theme song to Quantum of Solace, is something completely new.  Much as the film being a sequel is new to the series, “Another Way to Die” is the first, and so far only, song to be a duet.

White says his favorite theme from the Bond series is John Barry’s On Her Majesty’s Secret Service.  That definitely makes sense.  You can hear a little bit of it in the music.  There’s a bombastic feel to the main riffs and horns that doesn’t go straight for the outright copy, but evokes and pays tribute to that theme.

However, there is some controversy that surrounds the theme.  First, it’s not exactly well received.  Most will say it’s a perfectly fine song on its own merit.  Many, though, were quick to put the song on blast for it not really feeling too much like a Bond song.  I can understand.  It does feel heavily produced.  That said, I will not say it is anywhere near as bad as the “Die Another Day” song for how over-wrought that whole thing felt.  It probably helps that I prefer the rock sound of “Another Way to Die” over the techno-dance feel of the Madonna piece, but I don’t disparage anyone saying that this song didn’t exactly suit their expectations.  I admit that even I had to listen to the song a few times to truly connect to it.  I can say now, though, that for each Bond theme that will come in the future, this song meets the bare minimum of what I want for a theme song.  When I hear a new one, I think, “Is it at least on the level with ‘Another Way to Die’?”

Another controversial thing for the theme is that Coca-Cola used the song in a commercial for Coke Zero which was helping promote the film.  White claims he made no approval for the song to be licensed for that sort of promotion.  I don’t know what is or is not in a contract for songs used in Bond films, but I feel like that may not have been in his control.

David Arnold is back for his fifth consecutive score.  It is also his last – at least currently.  This score borrows a little from Casino Royale whenever Vesper is mentioned which is a bonus.  Arnold claimed that this was a completely different approach he used to score the film.  Apparently, Arnold was on an accelerated schedule to complete Casino Royale.  This time he had a lot more time to mull over the various motifs and sound of the film.

Quantum of Solace director Marc Forster also likes to work very closely with the composers of the score for his films as well.  That allowed Arnold to get access to a script and be able to write specific pieces around the emotional beats from the page that Forster could later drop into the film in the sound mixing stage.  Overall, I’d say it’s a fine score.  Maybe, even though it is still serviceable, my least favorite of Arnold’s work on the series.  It’s not because he reserves the “James Bond Theme” for the end again (or at least holds back a fully orchestrated version of the piece until then).  It’s not because it borrows heavily from Casino Royale in some parts.  It’s just kind of not super memorable.  I appreciate the closeness to which he worked with Forster and the time he was able to spend on it.  I think it might just come from this film not really living up to the standards of what you’d expect from the series – especially after the high the series got to with the previous installment.

Daniel Kleinman was not available, or possibly turned down, the titles for Quantum of Solace.  It’s possible, just looking at his IMDb page, that he was busy doing shorts for Intel’s ad campaign.  Instead, the titles were designed by MK12 – a filmmaking and design collective.

These aren’t too bad, honestly.  They aren’t quite as artistic as what Kleinman has done over the past five films, but there are some neat features in the opening.  I like the desert motif that plays into the final act.  I really like the girl who looks like she is emerging from the sand that begins around the 1:05 mark and happens multiple times until multiple women come up from the sandy dunes.  I also like some of the usage of the circles that normally lead to the gun barrel sequence and seeing Bond in that circle at the beginning of the sequence.

While not as great as what we’d see from Kleinman, MK12 gets the job done well enough before Kleinman comes back to get really artsy.

Join us next week for the third Daniel Craig film in the series, and my all time favorite, Skyfall.