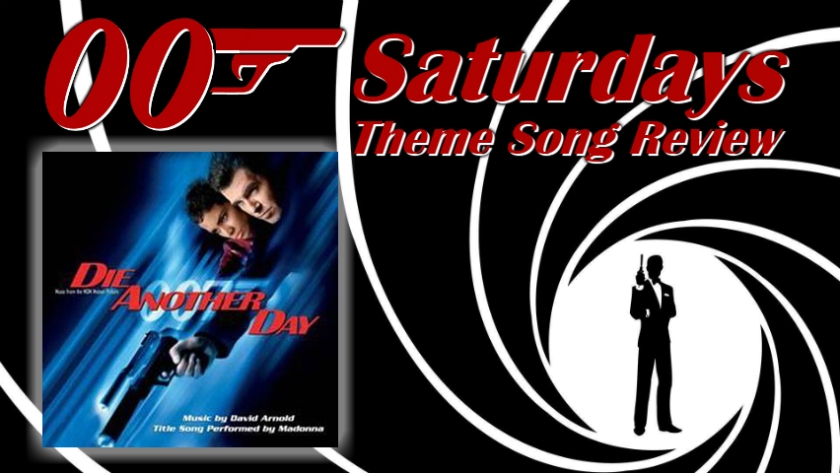 It’s time for another 00 Saturdays here at Film Seizure.  This week, it’s time to move onto the music of the first James Bond movie of the new millennium – Die Another Day!

This song is atrocious.  I’m getting ahead of myself.  Madonna and James Bond almost seem like a match made in heaven, right?  She was a superstar pop singer of the 80s and 90s and was a legitimate sex symbol.  There are many songs of hers that I love from “Borderline” to “Live to Tell” to “Crazy For You” to name three favorites (as well as many of her big hits of the 80s and early 90s).  However, this comes from an era of Madonna’s that is not the era I like.

This song encompasses everything I dislike about her music after she journeyed into the techno dance genre.  What shocks me most is that this made the film.  I guess producers wasn’t happy with the previous, more classic (and certainly classier) songs that led the films of the Brosnan era.  This film is not co-written by score composer David Arnold, so it does not litter the film’s soundtrack, but it’s just dreck.  There are no decent lyrics.  It sounds like a song that is already remixed, which is my way of saying it is overproduced.  It’s meant for raves where people too high on whatever designer drug they decided to take to avoid their issues with their parents can jerk and throw themselves into each other.  There is absolutely no beat or rhythm and it only exists in a playlist of mine because it has the distinction, however impossible, of being a Bond theme song.  There are some not so great Bond themes, but this is the one truly BAD song of the bunch.

Shockingly, this song is OVERWHELMINGLY adored by people under the age of 24 in 2002.  That’s fine, but it has no place being in this series and a further remixed version of the song is featured during the closing credits.  So if you thought the original version is overproduced, hold onto your hats because it can, and does, get worse.

The score is okay.  David Arnold returns and does a decent enough job mixing the symphonic stuff with his more modern, electronic sounds.  However, this is a movie, kind of like how GoldenEye visually overpowers the mediocre score, that is often ignored due to some truly baffling things going on in the film itself.  This movie is a mess and, unfortunately, the music can’t really lift it out of that situation.  I wish I could focus more on the score and less on the really weird sped up edits and shit slow motion, but it’s hard to.  I wish the audio of the movie had fewer puns and one liners all over it so I could focus more on what Arnold was giving me.

What is there, and what you can hear if you are able to close off the other not so great stuff in the movie, is competent.  Arnold can at least be counted on for that.  The music used for the hovercraft chase, appropriately titled “Hovercraft Chase”, in the pre-title sequence uses a wonderful mix of classic horns that even has excerpts of the “James Bond Theme” as well as things that sound an awful lot like a John Barry composition from the 60s.  Within that, you hear a lot of the modern synthesized rhythm and percussion.  If I could say one thing is that I feel like this is what GoldenEye’s soundtrack could have been.  Still use those electronic drums all you want, but still give a classic sound and feel.

He does have some lovely romantic music too in “Jinx and James” as well as some reused themes from the previous film’s soundtrack in the piece “Going Down Together” that closes out the movie.  Speaking of “Going Down Together”, a Korean figure skater, Kim Yuna, used that music as part of a “James Bond Medley” and skated to a Gold medal at the 2010 Winter Olympics while using the piece in the medley.  When you separate the music from whatever it is that your eyes have to deal with, you get that terrible feeling that the movie could have been better – nay, SHOULD have been better.

Boy…  I have mixed feelings here.

Daniel Kleinman was tasked with having to create an opening titles sequence that showed something we’ve never seen before – Bond getting tortured.  But then he also has to do something to match that shitty theme song.  How he is able to do anything that is visually interesting and, at times, confusingly erotic, is fantastic.  I love the scorpion tails snapping up and the general use of the fire and ice.  Ice being a big part what with the ice structure in ICEland, as well as diamonds.  Then fire because I suspect Bond’s torture with the use of scorpions makes his veins feel like they are on fire.

It’s hard to find things I truly like about this movie considering it is at the bottom of both rankings for movies and songs, but this is at least an okay opening title sequence.

After the mess of Die Another Day, it’s time for a brand new approach and a fresh restart.  Join us next week for the first Daniel Craig film in the series, Casino Royale.