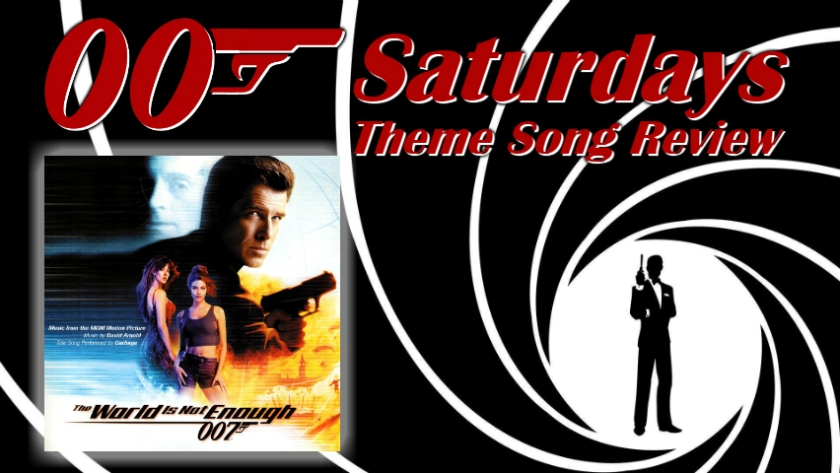 “The world is not enough
But it’s such a perfect place to start, my love.
And if you’re strong enough
Together we can take the world apart, my love.”

It’s time for another 00 Saturdays here at Film Seizure.  This week, it’s time to move onto the music of a fairly underrated film in the James Bond series – The World Is Not Enough!

David Arnold wanted to work with past James Bond theme lyricist Don Black to work on a theme with the last movie, but was denied.  The producers wanted a popular artist to work on the song and thus Sheryl Crow’s “Tomorrow Never Dies” was selected and was not closely tied to the film’s overall score.  Interestingly, Don Black did write the lyrics for Arnold’s “Surrender” that appeared during the end credits.  That song was intended to be the original theme and the music closely matched the score.

This time, Arnold got his wish to work with Black for a proper theme song and brought in rock group Garbage, with lead singer Shirley Manson, to perform the song with Arnold providing a more symphonic sound to the overall composition.

While I like the previous song quite fine, this song is a true return to classic 60s and 70s style Bond theme.  It follows the medium tempo precedent of the past three themes, but allows for a bombastic style of singing from Manson.  It’s done from the point of view of Bond Girl, and evil mastermind, Elektra King.  Arnold said he wanted a song that reflected her perspective of having a “steel fist in a velvet glove” that would “beckon you with a crooked finger.”  I think the song perfectly encapsulates that and even does something that not many Bond themes do – tie very closely to the plot of the film.  Many themes may try to align ideas or themes to something happening in the plot or a character in the movie, but this takes lines directly from the film to tie it that much closer to the movie.

Arnold also was very adamant to have a song that would have the old feel of a classic Bond theme, but he still wanted to tie in more modern electronica sounds.  Arnold immediately wanted Manson and claimed she screamed in the phone when he made the offer to her out of excitement.  Garbage’s drummer and co-producer Butch Vig said it was the band’s dream to contribute to a Bond movie.  The band being Scottish, which was Sean Connery’s nationality, the series was very near and dear to them.  Supposedly, it was reported that several other singers were auditioned, but rejected.  Arnold denied this making it seem like Garbage was the only act offered to do the song which is also not common to the series.

This is the best score of the entire Brosnan era.  GoldenEye was a little too underscored.  Tomorrow Never Dies worked because of Arnold’s reverence for the series and composer John Barry, but you could easily say it relied too heavily on the “James Bond Theme” in several scenes.  This time, there was symmetry between the theme song and the score as a whole for the first time since The Living Daylights.  That’s no insignificant element to the overall sound of a film in the series.  The strongest scores are those that do tie themselves to the theme song.

This also allowed for David Arnold to do what he proved he could do very well with this album Shaken and Stirred: The David Arnold James Bond Project – he modernized the series musical landscape.  I’m not a particular fan of electronic music.  If it isn’t someone I trust or am already a fan of, introducing an electronica style is not something my ears particularly care for.  However, here, Arnold nicely integrates synthesized music into a symphonic score that still sounds like what a Bond film’s score should sound like.  In addition, Arnold used percussionist Pete Lockett, qanun player Abdullah Chhadeh, and singer Natacha Atlas to add a little more ethnic flavor for the scenes that took place in Turkey and Central Asia.  It’s a full and very accomplished soundtrack and score for the film.

It also happens to be quite liked by critics as well.  Even conductor Nicholas Dodd who often works with Arnold states it is his favorite Bond score.

Originally, Arnold had intended to use the below song, “Only Myself to Blame”, as the closing credits song for the movie.  The lyrics were also written by Don Black, and performed in a jazzy blues style by Scott Walker.  However, director Michael Apted felt the song was too much of a downer to exit on.  Arnold chose a techno remix of “James Bond Theme” that also incorporated some of the musical cues from “The World Is Not Enough” to close out the film.

I do like the jazz music to the “Only Myself to Blame” song, but I don’t love the lyrics.  I do agree with Apted that this would have been too solemn to have audiences exit the theater hearing.

This is another great Daniel Kleinman opening title sequence.

Oil plays a huge part in the film with the Kings being oil barons.  The women submerging into an oily pool and also looking like they are made of oil is great.  I also always liked the idea used in the sequence to have a globe with the oceans made of oil.  In some ways, it’s a subtle stab at the environmental problems of oil.

I also love how it begins with an injured Bond dropping himself off the side of the Millennium Dome in London.  It shows us that he’s injured, which plays a part in the film as a whole, but it also ties the opening into the credits.  It also ends with the dissolve of the oily pool into the funeral for Robert King.

It should not go unnoticed that there are moments of very suggestive imagery with the oil pumps and a column of oil shooting up that starts of maybe looking phallic but also like ejaculation before it turns into a trio of women.  Kleinman has a great visual style and is able to artistically bring you a visual feast for each and every Bond film he works on.

Join me next week for a look at the final Pierce Brosnan film in the James Bond series, Die Another Day.