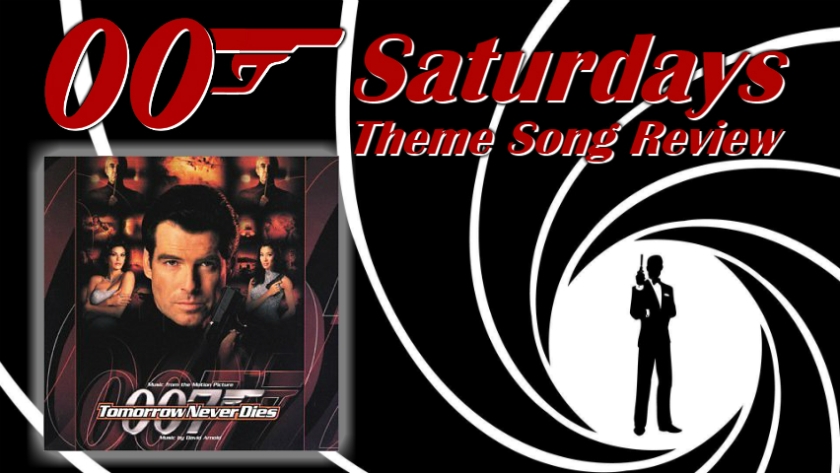 It’s time for another 00 Saturdays here at Film Seizure.  This week, we’re discussing maybe one of the better aspects of the the underwhelming Tomorrow Never Dies – the music!

David Arnold was brought in for the music on this Bond outing.  More on that below.  I bring it up now because originally he wanted to write a song himself with the help of James Bond lyricist Don Black, but MGM wanted something a little more modern with a pop singer attached.  There were about a dozen songs submitted from several 90s acts, but the one that won out was from Sheryl Crow.

I think it is an excellent choice.  The song itself is fine.  It’s far from the worst, but maybe not quite as good as “GoldenEye” was for the previous film.  I will say one thing for sure, though…  Crow sings this song very seductively.  She’s got a great voice for this style of song.  I’ve said to people that my biggest frustration with the current Bond song from Billie Eilish for No Time to Die is due to it being too monotone and sleepy.  I compare that song to this where you have a deeper voiced singer like Crow.  There are lines that you can draw between the two themes in terms of lyrics, but Crow’s “Tomorrow Never Dies” is a million times sexier and more exciting.  Maybe it is coming from Crow working outside her normal sound and Eilish being tapped to do a song in her style that makes the difference, but I do find this to be one of the sexier songs in the series.

It should be noted that Arnold’s original theme was recorded by k.d. lang and allowed for use during the film’s closing credits.  While named “Surrender” instead of “Tomorrow Never Dies” which is often heard during the song, it was Arnold’s attempt to do something a little more classic Barry/Shirley Bassey in sound.  It’s not too bad either, but it might have been better to keep to something with a little more current sound.

Alright, so I mentioned him already, but this is the first David Arnold score for the series.  Originally, an offer was made to John Barry to make a return to the series, but, according to Barry’s agent, there was no agreement made on Barry’s large fee for a new score.  Barbara Broccoli then turned to David Arnold upon suggestion from Barry himself.  Arnold was a huge fan of Barry’s work and even released an album earlier in 1997 called Shaken and Stirred: The David Arnold James Bond Project.

That album was particularly popular and effective in updating many of the Bond themes and pieces with a more modern sound.  It seemed like a match made in heaven – and it really is.  Arnold makes the music noticeable in this film where Éric Serra couldn’t with his GoldenEye score.  Not only that, it’s the best of both worlds as Arnold is not afraid to use synthesized, electronic music in his scores but stays very close to the heavy horns and symphonic sound that Barry had always used.

In a move that I feel is meant to atone for it being almost criminally underused in GoldenEye, Arnold uses the “James Bond Theme” piece quite often throughout the movie.  One of the things that many people seem to take issue with in Serra’s score last time was the cover of the theme with an entirely synthesized version as well as the symphonic version used in the tank chase scene feeling kind of tacked on and so blatantly different than the rest of the score.  Arnold really makes up for it here.  In the 2000 re-released score that features only Arnold’s orchestral music, variations or pieces of the “James Bond Theme” music is heard in no less than nine tracks.  It almost felt like an edict to include the theme as much as possible.

For a film I really don’t care much for, I do tip my cap to David Arnold for coming away with a pretty solid score that can be very easily compared to and held up to some of the great scores of past movies.

I will say, though, this is not quite as good as his GoldenEye titles.  One reason why is that the visuals, while wonderful, seem a little less connected to the themes of the movie.  GoldenEye had women tearing down the old iconography of the Soviet Union.  This time, there are great x-rays of guns, bullets, and even some of the women’s clothes look clear in parts.  That said, it’s harder to connect the circuitry and the transparent weapons with the plot.

I guess there is something you could try to connect with transparency and media and what have you, but it’s a little bit of a stretch.  Regardless, these titles are still beautiful.  I love the bright white backgrounds used throughout much of the credits.  It’s very attention grabbing.

I don’t think you’re going to hear me say too much negative about Kleinman’s work.  However, his work on these early Brosnan films are stellar and should be pointed out as such.

Join me next week for a look at the film in the James Bond series, The World Is Not Enough.