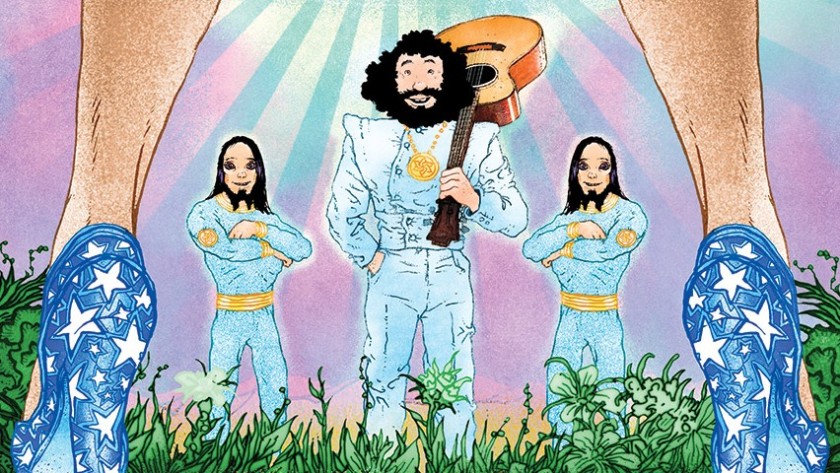 Scratch that. Let’s be fair. Welcome to the strange and fascinating world of self-proclaimed prophet and founder of a new religion, Raël. Raël was born Claude Vorilhon in 1946 as France was rebuilding from World War II. He was raised in the home of an atheist grandmother and the son of a devout atheist mother – yet he still attended a Catholic boarding school as a child until he was kicked out for taking communion without having been baptized.

But we’ll get back to the man at the center of the documentary The Prophet and the Space Aliens.

Let’s start where the film’s director, Yoav Shamir, begins his story and connection to Raël. Shamir grew up in Israel and always had a fascination with the stories of God and angels and heaven and hell, but was never particularly religious. He understood his homeland was often ravaged by religious wars and it moved his fascinations to the inner workings of how religions form and what the goals behind those who start the religions are. One day, he received a letter saying that he was chosen as “an honorary guide of the Raëlian movement” and he was selected by Raël directly. Curious, he learned more about the mysterious figure and agreed to show up and accept his award feeling that as a documentary filmmaker, that’s just something you should do. He was excited to be in the same company as other honorary guides like Madonna, Hugh Hefner, Jimmy Carter, and several other humanitarians and politicians. He was surprised to find out he was the only person to ever show up to accept his award.

Shamir does something very interesting in this documentary.  He allows Raël and his followers reveal themselves to him naturally.  He still intermixes a discussion he has with a mentor and theologian who discusses with Shamir some of that ideology that goes into creating a religion and what makes the inner workings interesting.  The mentor says that it isn’t so much that the actual message or debunking the message or the beliefs of the members that makes the story of the religion interesting – it’s the activities and the more mundane day to day lives that often reveals whether or not something is good or bad.  Unless you are talking about Branch Davidians or Heaven’s Gate people who are literally killing themselves for this belief, trying to make them reveal that everything about this is bullshit is pointless and uninteresting.

That builds this almost contentious viewing experience.  I, myself, am not religious.  I actually have always been raised agnostic, but, in more recent years, I’ve been flirting heavily with atheism.  For probably 75% of my life, I’ve known religion is a man-made construct.  I didn’t have a parent or teacher or brother or friend tell me that.  It’s obvious that if there’s even a sliver of a chance that all these books and religious text is a little too fantastical, then the questions begin to outweigh the faith.

That’s where The Prophet and the Space Aliens hits the right notes for me.  I think Shamir does a wonderful job of showing that there are some good ideas in Raël’s preachings.  It’s hard to argue with someone who pushes for peace and love and happiness.  It’s hard to push back against a guy who preaches that maybe outside religions that, more or less, invaded Africa aren’t exactly great for the Africans if it means it completely scrubs their traditional belief system that seemed to be working really well for a long, long time.  It’s also extremely difficult to be upset with the guy who wants to help women who were forced into female genital mutilation.

And, hey, sometimes people just like hearing a message that it is perfectly fine to fuck whoever you want whenever you want.

These were the things that felt positive about Raël and his message.  Love, sex, freedom, happiness.  Got it.  However, there is this sense in the first two thirds of the movie that provide weird hints into the mindset of Raël himself.  He seemed to be a fairly unremarkable person.  He was small and not very mannish.  He wasn’t any good at physical sports or any kind of activity that required physicality at all.  He seemed to be a good driver as he discovered a passion for racing.  He was a passable guitar player and singer and had a brief moment in his teens and early 20s that seemed to point toward a music career but he wasn’t really good enough for that.  He went into journalism, somewhat unimpressively, but was able to convince advertisers to get him a race car that seemed to point toward a possible future in racing, but that seemed to also wash out for him.

Oddly enough, that’s when he met the Elohim, a race of aliens that were the true creators of the human race, or so says Raël.

It’s here that you start to see the holes in Raël’s story.  While he is obviously charismatic today, he grew up fatherless, shy, unremarkable in almost every way, he didn’t seem to finish school, and he didn’t hold down a job for very long (not that the jobs he had were even all that mundane).  He needed money and a career.  When you start realizing that, it’s about then that you see that maybe he’s just telling a really nice story.  It’s a story that causes people to smile a little too much around him, and, sure, they seem happy and what they hear from him seems to be nice, but it’s weird.  I don’t buy into any idea that these people are necessarily brainwashed because who wouldn’t want peace and happiness and all that jazz?  Maybe a few of the people, like a one of his “Bishops” who was a CEO at a biotech company that basically threw it all away on a VERY public hoax about a cloned human baby, are a bit brainwashed, but most appear to be happy because the message is one of happiness – even if it costs them 10% of their earnings to be part of the movement.

There are constantly young women in their late teens and early 20s around Raël in various degrees of undress or sexy costumes (particularly in Japan where some of these girls are dressed like sexy French maids).  He seems to push a little too much on the sexual stuff and starts to dial back the other “be kind to one another” messages.  The symbol of Raëlianism is a Star of David that seems to stem off of a swastika.  That’s only ever explained as it being the symbol that the Elohim representative that Raël met was wearing (yes, the swastika has representation among many, many cultures and it was co-opted by Hitler and the Nazis, but still…).

These are the little oddities that paint a picture behind the picture we’re presented by Raël and his followers.  That brings us to the final third of the film starts to take a slightly darker turn.  It’s even scored differently too.  Shamir begins to question the goals around being given this award by Raël and starts to dig deeper.  This part of the film becomes a fascinating mix of interesting and disappointing.  You can’t be upset that Shamir does the homework.  You can even understand some of his mentor’s advice that might go against your own gut reaction when you start to feel weird about this group of people and their leader.  You even understand that old friend of Raël’s when he doesn’t seem to make a stand one way or another whether or not this man is full of shit or not.  Sure, your very human reaction is that when the questionable stuff starts to show itself, you want to bring this guy down, but the documentary is right to not go down that path.

It comes full circle to Shamir’s own take on religion.  It’s all man-made and hardly worth going to war over or trying to destroy someone for the sake of it, and it is something like “cartoons, Scrabble, and ice cream sundaes” – something to enjoy and love without having to kill someone else who doesn’t believe the same thing.