Director Ryan Kruger doesn’t make films, or movies, or flicks, or joints. He makes “things”. “A Ryan Kruger Thing” is how he identifies his short films and music videos, and the same goes for his feature debut FRIED BARRY. One could read a little bit of conflicting self-deprecating pretension in calling your creative work a “thing” but in the case of the supremely weird and off-kilter FRIED BARRY, I think it fits. FRIED BARRY is a feature length adaptation and narrative expansion of Kruger’s 2016 short film of the same name. 3 minutes in length it features a strung-out heroin addict having the most tweaker reaction ever after taking a hit. It was acclaimed for its kinetic editing, innovative sound design, but mostly because Gary Green, the actor playing the title character, Barry, is so interesting and engaging to look at.

How do you turn a 3 minute short about a drug overdose into a feature length “thing”? You hammer out a script in 3 days and build it around the elements that made the short film so well received: A compelling looking subject/actor, visual flair, fast and precise editing, and ear-bending sound design. Whether it works or not might be up to the beholder. I can say that my experience with it is mixed and not entirely positive.

Fried Barry thing2.0 follows our drug addicted and abusive Barry through one of his benders. He gets high, wanders around Cape Town, goes home and verbally abuses his wife and son before leaving the house in an uproar because his wife calls him out on his bullshit. Barry is screwing up his life and he’s not willing to face that. Barry hits the streets again, goes to a bar, takes more drugs and eventually gets abducted by a space alien. These aliens get their probes into Barry and then dump him back onto the streets, but he’s not Barry anymore. His body has been taken over by an alien in what one assumes is an experiment for said aliens to learn more about how humans work; or maybe it’s to impregnate as many women as possible and take over the earth? More on that later.

It’s at this point I started thinking about Jonathan Glazer’s (another music video director) UNDER THE SKIN. Much of the premise and themes are the same here, but the approach and style could not be more different. In UNDER THE SKIN you have an extraterrestrial alien in a human body, seducing other humans in some twisted scheme of alien experiment or survival. Along the way the alien slowly understands, at least biologically, what it means to be human and decodes many of the social norms we use to pass ourselves off as such. It’s a slow burn meditative experience where the audience finds themselves learning more about themselves through the eyes of an invading predator. FRIED BARRY turns Scarlett Johansson into a wild-haired, middle-aged, drug addicted dentist’s nightmare and cranks the volume to 11. While Kruger’s film also examines our humanity through the eyes of an alien, he does something a little more clever. He gives Barry some of his humanity back by way of alien possession. Kruger is making a statement that Barry is so far gone in his addiction and self hate, so “fried”, that when he is embodied by an alien force who has no concept of being human, he is actually more like himself and the man his wife fell in love with. But then that could also be the super high charged pheromones Barry gives off that make all male attracted humans want to have sex with him so that he can impregnate as many women as possible and take over the earth. More on that later.

Now Barry starts wandering the streets of Cape Town but as an alien. Kruger’s narrative and style here owe a great debt to Sean Baker’s TANGERINE, for it’s meandering day-in-the-life cinema verite, and Quintin Dupieux’s RUBBER, for its batshit surrealism and self-awareness. Barry meets all sorts of characters on the street and accepts every invitation. He goes to raves, visits prostitutes, saves children from a creepy kidnapper, saves a guys life with mysterious powers, probably kills another guy with mysterious powers, goes to the grocery store, gets hit on by the strangest cheese sample man and checkout lady in film-land and has sex with at least 3 women. The first woman is someone he picks up in a club. She is out of Barry’s league, but for some reason she wants him. It was a little strange earlier when a very pretty girl gave Barry free Ecstasy but now it’s clear that one of Barry’s new alien super-powers is that women want him. Really, really want him. She makes Barry wear a condom, gets what she needs and kicks him out of her apartment. It seems Barry didn’t get what he needed because he allows a pimp to set him up with a prostitute and this time there isn’t a condom in sight. Barry does his thing and probably the most disturbing moment in all of this year’s Fantasia films happens. I won’t spoil it, but you’re either in or you aren’t afterward. Barry the alien is here to make babies, and very efficiently. This sets up a later joke that I’m convinced is homage to Andrea Bianchi’s BURIAL GROUND and it made me wince in anticipation. There is also a pretty obvious ONE FLEW OVER THE CUCKOO’S NEST reference that you can discover on your own. 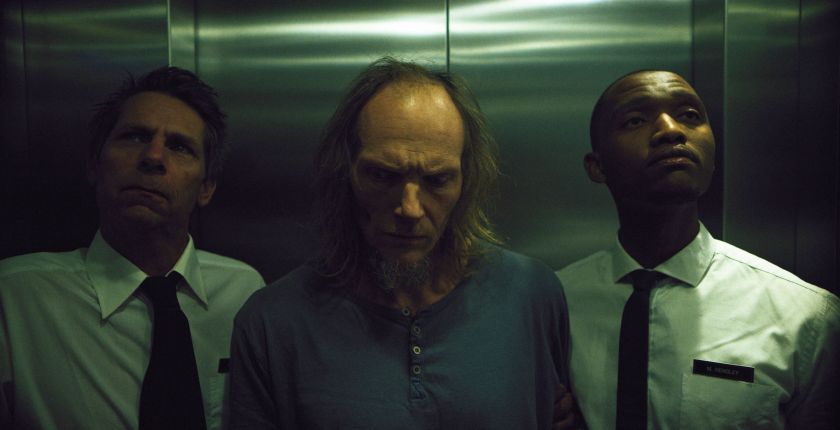 Barry does eventually make it back home and there is a sweet moment with his wife and child. Barry is more present and loving with them as a space alien than he is as an addict. His wife is reminded of the Barry she fell in love with before drugs destroyed all of their lives. Gary Green’s performance in this scene evokes Kyle MacLachlan as Dougie Jones interacting with his son Sonny Jim in some of the sweetest scenes of David Lynch and Mark Frost’s TWIN PEAKS Season 3. But when the alien in Barry starts to reject its body, Barry is flung back out into the streets in a panic.

Gary Green really is what makes this movie compelling. He is not a trained actor, but actually a stunt actor and extra. Kruger started putting him in his short films because as faces go his is a fascinating one. He puts everything he has into this role and his range is amazing. He’s not always likable as a character but watching Green make choices as an actor to express complex ideas, actions, expressions, and emotions is the heartbeat of FRIED BARRY. I mentioned not having an altogether positive experience with this “thing” and it comes down to a simple fact. FRIED BARRY as an idea feels half-baked. Kruger had an opportunity to make a feature based on the overwhelmingly positive response to the short film. He used that opportunity to showcase many skills: the talent of Gary Green, his own assured talent as a visual artist and director, his ability to assemble and work with a very large and diverse cast of characters, and his keen understanding and recognition of talent in his collaborator, the EDM artist Haezer, who handles the duties of score and sound design. The sound design of FRIED BARRY is a character in itself, but if you were to take out that element or Green’s performance, I’m not sure you are left with much of substance to take you along for this ride. I do know that I am on board for what Kruger, Haezer, or Green do next.