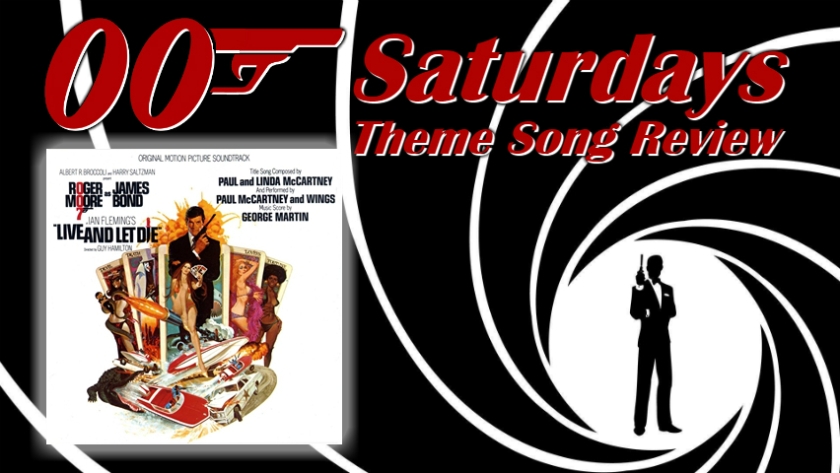 “But if this ever changin’ world
In which we live in
Makes you give in and cry
Say live and let die.”

It’s time for another 00 Saturdays here at Film Seizure.  This week, I’ll be discussing the music to Live and Let Die and its interesting background.

“Live and Let Die” is a theme song that almost every rock and roll fan knows.  It helps that the song was composed by Paul and Linda McCartney and performed by their band Wings.  I have to believe that most everyone knows Paul McCartney thanks to his time with the Beatles.  Or at least they did in 1973 when the song came out.

“Live and Let Die” marks the first time the Bond series used a rock and roll song.  It also was a massive hit.  In the United States, the song would reach #2 on the charts and stay there for 3 weeks.  What’s fascinating, though, is that there has only ever been one Bond title song to hit #1 on the charts.  Most people believe it is “Live and Let Die” because, for one, it is Paul McCartney at the top of his solo game, and, for two, it’s such a well liked song, it was a hit for Guns ‘N Roses when they covered it in the 90s.  Bond songs are popular in their own way, but none had the crossover appeal as “Live and Let Die”.

Its dramatic stings and bombastic beats sound like explosions.  Even in the video shared above, the person who put it together timed stings with explosions because it’s a powerful song.  It was exactly what the new era of Bond films needed to move forward.  It was also the first Bond theme to be nominated for a Best Original Song Academy Award.

The real interesting story is why John Barry is not involved with Live and Let Die.  First, he was busy working on a musical.  Second, maybe more importantly, he had a falling out with producer Harry Saltzman over the theme song “Diamonds Are Forever”.  Remember, he instructed Shirley Bassey to imagine singing to a penis?  Saltzman was furious over that.  So Barry was out, at least in the short term.

Saltzman previously turned down producing A Hard Day’s Night for the Beatles – a decision he regretted.  So, he wanted to make up for it by approaching Paul McCartney to write the song for Live and Let Die.  McCartney agreed, but he didn’t come cheap.  In fact, McCartney used up almost all of the music budget.  So they had to find a guy to produce a score on the cheap.  In comes Beatles producer George Martin.

Martin worked closely with director Guy Hamilton to know what the musical landscape would be for the film.  Martin’s completed score, which does also borrow heavily from McCartney’s music from the theme song, required very little edit or change.  Martin felt working with Hamilton really helped to really nail down a great soundtrack for the film.

Due to many scenes taking place in New Orleans, the Olympia Brass Band performed a standard called “Just a Closer Walk with Thee” that gets mixed with “Joe Avery’s Place” as a more celebratory piece after the funeral dirge.  This music was used in two scenes – one pre-title scene and another later in the film that depicted allies of Bond’s being assassinated by Kananga’s men.

Once again, Maurice Binder was back for the opening title sequence.  As usual, Binder leans heavy into the themes of the movie.  For this film, he relies on flames, skulls, and hand gestures suggesting a more voodoo or pagan imagery.  He also heavily features women of color as people of color are a major part of the film itself.

What is kind of interesting about this film’s opening title sequence is that it is dominated by McCartney’s song.  That’s not a knock on Binder who was doing his usual solid (and, yes, suggestive) work, but the song is far more memorable than his titles.  That’s unusual as most of the time his titles meld well with whatever the theme song is.

It’s just really hard to compete with a Beatle.

Join me next week for a look at the ninth Bond film, The Man with the Golden Gun.