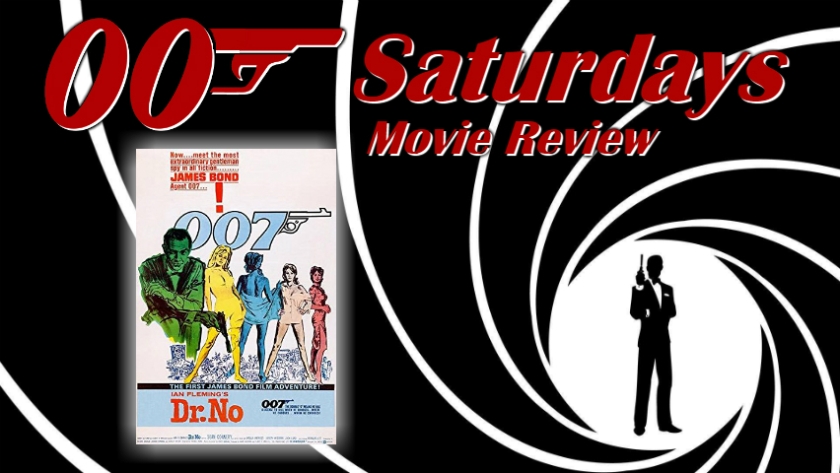 “World domination.  The same old dream.  Our asylums are full of people who think they’re Napoleon.  Or God.” – James Bond

Welcome to the first week of 00 Saturdays here at Film Seizure.  This is our weekly walk through the Bond films.  And with that, there’s no better place to start than the beginning – 1962’s Dr. No.

This will be a review in five parts with the following elements:

These first three films starting today, then continuing on biweekly over the next four weeks, I will be rigidly sticking to that element-based, sectional structure before moving more to a regular review style.  In all, I’ll do my very best to appropriately express my feelings for a film franchise that will soon be 25 films old.  The odd number weeks of 2020, from week number 1 to week number 49, I’ll be reviewing the films of the series.  On the even weeks, through week 50, I’ll be looking at the theme songs (as well as other elements of the films’ scores) and the gorgeous opening title sequences.  Week #51 will be a countdown, in my personal opinion, of the theme songs with Week #52 rounding things out with my personal ranking of 25 films.

In Jamaica, a British MI6 Station Chief and his secretary are killed.  The assailants make off with two important files – “Crab Key” and “Doctor No”.  In London, MI6 head “M” assigns James Bond, agent 007, to investigate the Station Chief’s murder.  Once in Jamaica, he finds assistance from CIA agent Felix Leiter and friend to both the murdered Strangways and Leiter named Quarrel.

Bond soon finds himself constantly hounded and followed.  He discovers there is a mysterious island called Crab Key and there are people working within MI6 in Jamaica that are connected to a half-Chinese, half-German man named Dr. No.

Bond finds out some geological samples Strangways recovered from Crab Key are radioactive.  However, Jamaicans are scared of Crab Key, claiming it is guarded by a “dragon” though Leiter assumes it is a legend and superstition started by No himself to keep people away.  When Bond gets to Crab Key, he meets a sea shell collector named Honey Ryder and they soon discover that the island’s so-called “dragon” is simply a flame throwing armored vehicle.

The real threat is Dr. No himself.  He’s a member of the clandestine villainous organization SPECTRE (SPecial Executive for Counter-intelligence, Terrorism, Revenge, and Extortion).  For SPECTRE, Dr. No plans to hijack an American missile launch that will serve as a first step to extort the world powers into world domination.  Ultimately, it is up to Bond to thwart the mad scientist’s plans to capture the missile and destroy the whole operation.

Oh, and, of course, save the girl.

I mean, shiiiit…  This is the first appearance of the iconic character of Bond and Sean Connery, still considered to be, by a large majority, the best Bond of the bunch.  His first appearance is at a casino playing baccarat where we wait to see his face until he speaks THE most famous line in film history – “Bond, James Bond”.  It’s a scene that drips with cool.  It’s immediately what most men, myself included, would aspire to be.

The version of James Bond seen on the big screen would differ from most film action heroes, but also Ian Fleming’s original Bond character from the novels.  Fleming’s Bond is cold and less sophisticated, while big screen Bond would cover some of that coldness with a layer of seeming high class and sophistication.  He carries himself confidently with dry wit.  However, perhaps shocking in the day of much cleaner cut heroes, Bond will play dirty.  This Bond isn’t a smiling sunshine hero.  When an assassin, Professor Dent, sneaks into his room to kill him, Bond coldly kills a man who no longer has any ammunition remaining his weapon when he could have simply knocked him out and taken him into official custody.  After all…  Bond has a license to kill.  He can use as he deems fit.

Almost all of the character of Bond himself is largely due to director Terence Young, who had a direct hand in the formation of Bond’s on screen personality.  Once Connery was cast, the two worked for weeks on how Bond would dress, how he’d say things, how he’d carry himself.  There’s a story told that Young sent Connery to his tailor to get a proper suit that would serve Bond well in function as well as style.  He had Connery sleep in the suit and Connery would report back that it was comfortable the following morning as it was when he first got the suit.

It’s that darkness and cool of Bond’s total persona that ultimately makes him a character that attracts fans to this day, but it’s especially rough around the edges in these early days thanks to Connery’s rugged looks and athleticism.

Canadian American actor Joseph Wiseman plays the first villain of the Bond series, Dr. Julius No.  Though he’s only seen on screen in the final 20 minutes of the film, he cuts a mean visage on screen.  You can certainly, from a 2020 perspective, bemoan a Caucasian actor being made up to look partially Chinese, but Wiseman does indeed have a cold, steely look.  Much like many other characters, villains in particular, in the series, Dr. No has a physical deformity – he has no hands.  Instead, he has powerful, metallic prosthetic hands.

Wiseman plays the mad scientist with a measured calm that is off-putting and, at times, really threatening and scary.  He’s on screen for barely a tenth of the entire runtime, but, upon looking back on the 100 minutes he is not there, you can feel his presence all the way through the film as if his own specter is casting a giant shadow over everyone.

Much like Bond’s first villain, the other iconic element that arrives late in the film is his first leading Bond Girl – Ursula Andress as Honey Ryder.  Initially, Julie Christie was considered for the part, but producer Albert “Cubby” Broccoli thought she wasn’t quite voluptuous enough for a character who would mostly be seen in a two-piece bathing suit.  So, with just a couple weeks remaining before filming began, Andress was brought on board after seeing photos of her taken by her husband at the time, John Derek, himself a notable photographer.  Her emergence from the sea in her very first scene is burned into the minds of Bond fans pretty much everywhere.

As much as Dr. No’s use of multiple beautiful women would set a standard for Bond films of the future, Andress would set a standard for Bond Girls forever.  Honey Ryder doesn’t have a name as memorable as Pussy Galore or Octopussy or Xenia Onatopp, but Andress’ blonde hair and European sultry looks makes her a particularly sexy leading lady.  It’s an ideal that is built that every woman, regardless of age, decade, or plot need is compared in future Bond films.

There are three other important ladies in the film as well.  The first, who will be seen once more, is the character of Sylvia Trench – Bond’s baccarat opponent, first “conquest”, and de-facto girlfriend in the early films.  She’s played by Eunice Gayson who had a decent acting career through to the early 70s.  I called Andress the first leading Bond Girl, Gayson really is the first Bond Girl in terms of being seen with 007.

Another trope in several Bond films will be the bad girl.  Miss Taro, a secretary at the British Government House in Jamaica who turns out to be working for Dr. No, asks Bond to come to her bungalow.  He beds her and, once she reveals that she had initially attempted to kill him and was still planning on setting him up, Bond has her taken away by the government never, I presume, to be heard from again.  Finally, I would feel remiss if I didn’t discuss Miss Moneypenny, M’s lovelorn secretary with whom Bond flirts every time he is in London to receive a mission.  Lois Maxwell will ultimately play Moneypenny through the 14th film, and the end of Roger Moore’s era.

While it is somewhat a product of its era, Dr. No is no less important in the history of the series.  This is where it all begins and certainly sets the stage for the super cool that was common in 60s spy thrillers.  There are a lot of ideas here that will continue for decades as well.  Ken Adam’s beautiful production designs, particularly for Dr. No’s lair, will be something fans would marvel at for five more films, and would often be imitated for the other films in the series where possible.  Colorful and eye-catching opening titles, designed by Maurice Binder, are still in use nearly 60 years later.  Gorgeous women and gorgeous locations, Bond’s somewhat terse relationship with his boss, M, and his flirtatious relationship with Miss Moneypenny, dry wit and puns, and stories that tend to play more as mysteries than straight action fare are all things that will become tradition in the series. 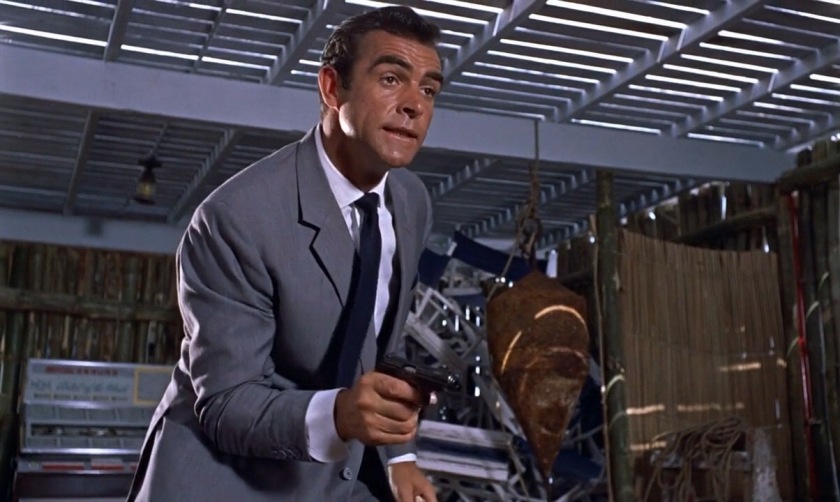 Join me next week for a look at the music of Dr. No.  In two weeks, I’ll be taking a look at the second Bond film, From Russia with Love.