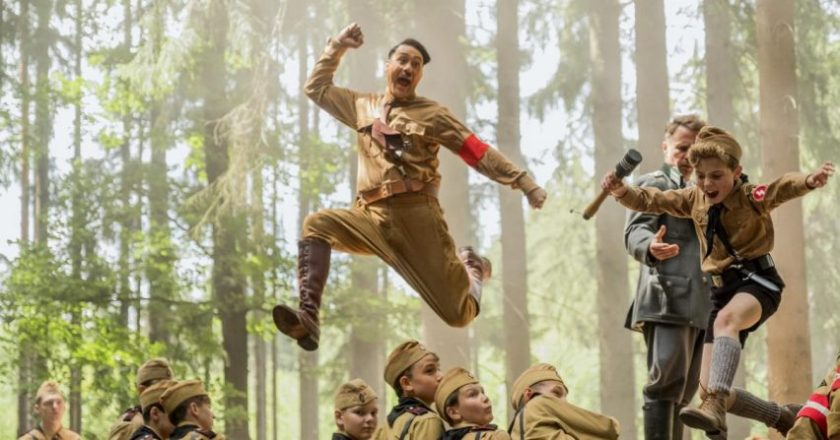 Ed and Patsy Bruce once begged, “Mammas, Don’t Let Your Babies Grow Up to Be Cowboys.”

It was a plea to prevent (mostly) dudes from being destined to be misunderstood, disliked, lonely, and overly prideful when it wouldn’t serve them well to be so uncouth in the world. Taika Waititi’s Jojo Rabbit might as well be an ode requesting the world to not let today’s youth grow up to be extremists. Don’t let them fall into a fanboy fanaticism of a completely ridiculous and, frankly, ignorant way of life. It might just be best to let the youth tell those idealistic hate mongers to fuck off and kick them through a window while they navigate the world and learn to trust again. 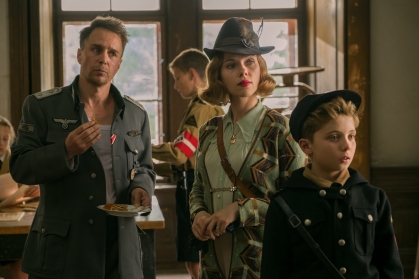 Jojo Rabbit, based on the novel Caging Skies by Christine Leunens, may seem too dangerously lighthearted to be told in 2019. The book was published fifteen years ago in what now seems to be much more innocent and quaint times. In a time before the internet’s darkest corners would use fear, negging, and isolation as recruitment tools for a far too many confused youths to build a strong “us vs. them” kind of collective that is now called the “Alt-Right”. On the surface, it would seem Jojo Rabbit would be too irreverent in a time in which so-called “cancel culture” is supposedly running rough shod over the internet landscape to wipe out anything that might seem difficult to truly discuss or poke a little fun at. After all, Adolf Hitler himself is our title character’s imaginary friend at the tender age of ten. It’s about a young idealist desperately wanting to fit in with what he feels to be the winning side in an existential war. Yet, it’s also a comedy. It’s also a heartfelt family drama in which the boy’s mother actively works against him while still trying to win back the son from a cold, dark place that has changed this innocent little boy into a tool of fascism. It’s truly a movie that should be important for our times.

Waititi plays Hitler himself, and it really helps to further illustrate that the entire portrayal of the Nazi movement of horror, racism, and genocide extremism is, for a lack of a better term, a total clusterfuck of an error of comedies. While you would absolutely be right in that what Germany did while Nazis were in power was in no way funny or a comedy, but the general principals of extremism is, on paper, too ridiculous to take seriously… until you can’t. This movie even literally mirrors that sentiment by making it a lighthearted, silly little movie until is punches you in the gut. 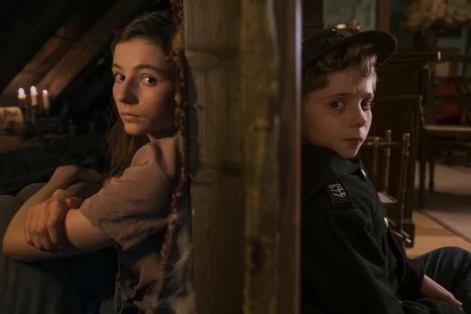 The basic plot of Jojo Rabbit is that Jojo (Roman Griffin Davis) is a ten year old boy ready to attend a Hitler Youth camp with his best, non-imaginary friend, Yorki. He is completely enamored with Hitler by way of covering the walls of his bedroom with Nazi imagery and large posters of the Fuhrer. After an accident with a grenade at the camp that leaves him disfigured and with a permanent limp, he returns to the city to work for the Nazi party as a gopher and delivery boy and other general jobs to make himself useful to the regime. His mother still tries to teach him the basic things in life like how to tie his shoes (something he hasn’t learned yet), what it means to fall in love (something he feels is near useless in times of war), why it is important to dance (something he feels is only for those without a job), and basically how to live life to its fullest instead of being so mired with this useless war and silly fascistic ideologies. One day, Jojo discovers a Jewish girl is living within the walls of his house. Worse, she was invited there by his mother. He struggles with the implications of having not only the enemy inside his home, but also starting to befriend, and eventually fall in love with, that enemy. Soon, the real world, and the horror of World War II comes crashing in on Jojo’s hometown.

What makes Jojo Rabbit such a lovely little film, and something very, very important in this present day, is that it shows how stupid extremism (in this case far right extremism) really is. It wraps all this into a ten year old boy because extremism, itself, is something so close-minded that it can only be followed by the immature, if not the cognitive disavantaged. It’s believing in words, and not trusting instinct, other people, or what you see and learn by being a proper, functioning member of general society. This is a ten year old kid who actually believes some Jews have scales because a Nazi told him that, once upon a time, a Jewish man had sex with a fish. When he finally meets a Jewish girl, he can actually see that their differences are not skin deep, they are completely non-existent. The only difference is that one holds onto the belief that he is stronger and in power, while the other is literally hunted like an animal.

What’s more is that this movie subtly shows you the recruitment activities of an extremist group. After Jojo’s grenade accident leaves him with quite noticeable scars on his face, he is belittled by older kids who have just graduated to the “honor” of going off to war to fight for the Nazi cause. It keeps him constantly saying he feels ugly and worthless – which only makes him want to do more to prove his worthiness to said cause. He’s too wrapped up in the desire to be a good little Nazi that he doesn’t realize that someone wearing the uniform of a Nazi officer is a poorly disguised gay man – something that would be very much against the ideas he holds dear. He can’t even fathom the idea of fun or love or dancing because the fight is all that matters. The enemy must be crushed at all cost! In doing so, he feels he is good, and right, and mighty. He would be worth something, even if he still only sees his disfigurement in the mirror. 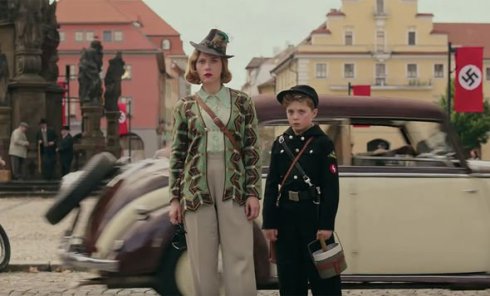 What makes that so ridiculous is how easy love and compassion pretty much smashes those walls. He does smile and laugh and love his mother (played touchingly by Scarlett Johansson) which softens him and makes him more human. If she would stick her neck out for this Jewish girl (Thomasin McKenzie), and she is something that he feels pure love for, why would that refugee be so bad? It isn’t Jojo necessarily growing more mature overnight, but it pokes holes in his flimsy beliefs. You know what they say about the more fantastical lies? They are the ones most easily believed by the masses. Jojo is ultimately left with a lot of the facade coming down and those lies becoming more and more unbelievable. He has one last moment that he tries to return to his hateful beliefs after something terrible happens to him, but it acts more as that large crescendo before silence – before he is truly able to begin healing and freeing himself.

In the end, despite the laughs, there are some very tough moments. There are times when you can connect the dots that still exist today, and you can see how we’ve gotten to the very brink of these same, dumb, extremist thoughts and actions yet again. It’s a funny movie when you see Hitler acting like a man child. It’s a touching movie whenever Johansson and Davis share the screen. It’s a whimsical romance between two children that replaces talk of cooties with that of adjectives like Nazi and Jew. It’s also kind of terrifying when you realize one simple truth:

No one survives extremism.