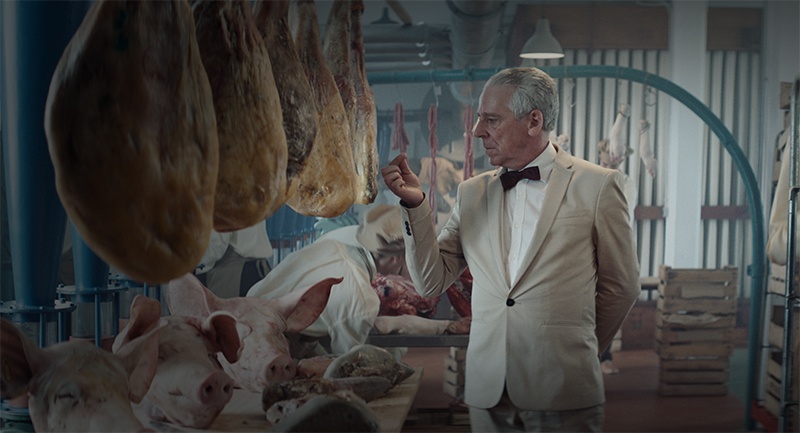 There are four types of horror movies I particularly enjoy: Bunker, Puzzle, Dinner Party, and Gimmick horror. Bunker horror typically concerns people trapped or imprisoned underground or in tight confined places. The reason may or may not be known to them or the audience (usually apocalyptic in nature) and much of the fun is learning why while seeing how people, who may or may not know one another, react and change as their baser human instincts consume them. Excellent examples are Romero’s DAY OF THE DEAD, 2011’s THE DIVIDE, and to some degree Bong Joon-ho’s SNOWPIERCER. Sometimes bunker horror intersects with what I call puzzle horror, which concerns a scenario where people, strangers or not, are thrust into a situation which demands they work together, combining skills and intellect to solve a problem at hand and maybe escape with their lives. Usually each character has something of use and the trick is determining how to piece the clues together logically. Examples include Vincenzo Natali’s sci-fi horror mind-bender CUBE, 2015’s CIRCLE, and the SAW series to diminishing degrees. “Do you want to play a game?” You get it. Gimmick horror could include elements of puzzle horror, but typically there is a supernatural element at play. The human cannon fodder must discern the rules by which an entity of some sort is dispatching them, then subvert said rules to survive. THE RING series, FINAL DESTINATION, HAPPY DEATH DAY, TRUTH OR DARE and countless others fit into this category. Puzzle horror and gimmick horror commonly intersect. Lastly, there’s dinner party horror, and it’s pretty self explanatory. This sub genre rarely crosses over with the former three, but there are examples, like WOULD YOU RATHER and to some degree Karyn Kusama’s brilliant THE INVITATION. The most common intersection for dinner party horror is home invasion horror (another favorite) like YOU’RE NEXT.

It’s pretty rare to see a horror/sci-fi film that encompasses 3 or more of these elements while managing to be a dinner party movie and Galder Gaztelu-Urrutia’s THE PLATFORM does just that, with an always appreciated dose of societal commentary and satire to boot. THE PLATFORM had its world premiere at the 2019 Toronto International Film Festival a few weeks ago and is enjoying its US debut at this year’s Fantastic Fest in Austin, TX. In THE PLATFORM, a luxurious meal is prepared each morning and loaded onto a moving platform. The platform descends each day from level 1 all the way down to an undermined bottom level. Each level consists of two residents (or prisoners, depending on their circumstances) who are given a few minutes to eat as much of the food and drink as they like before the platform descends to the next level. The residents spend a month on each level after which they are gassed and moved to another random level. Obviously the top levels are good and lower levels, where food will be scarce to non-existent, are very bad.

The movie drops us in on level 48, a good level we learn, and Goreng wakes up to his first day in the tower of cells. We know even less than Goreng and it takes time to understand the rules and behaviors of the place the film is set. This is puzzle horror at it’s best. You understand that the situation is bad, but you have no idea what the situation is until it the story unfolds. Goreng’s first cell-mate is Trimagasi and you come to find out that he has been sentenced to this place because he accidentally killed someone when he threw his television out the window. “Just an illegal immigrant” he says matter-of-factly at the end of an entertaining story that deftly illustrates the complexity of consumerism and capitalism via compulsive infomercial sales. We also learn that each resident is allowed one item. Goreng, proving that he doesn’t really understand the stakes, chose a book: Don Quixote. Trimagasi chose a self sharpening knife. It’s here that the movie sets up the real conflict: idealism vs self interest/survival.

After a month, the next level that Goreng and Trimagasi are placed on is 171. A very bad level and one that Goreng is ill-prepared for. There is no food left on the platform when it reaches level 171 and thus the game of survival really begins. All of Goreng’s naivety is exposed. You see, he volunteered for this experiment. He agreed to spend 6 months in the tower and figured he’d quit smoking, check a bucket list book off of his list, and come out with an accredited degree. Goreng is in for a very difficult 6 months, if he survives at all.

THE PLATFORM is perfectly structured puzzle horror. You begin disoriented, slowly learn the rules of the place, understand the stakes as they progress, and find yourself in a conflict of choice. It’s the kind of film that makes you uneasy because of the hypothetical questions it raises. What would you do to survive and how far would you go stretching or breaking your own ethics. We meet characters along the way who are determined to prove the decency of humanity in this experiment. Sadly, they seem to be overwhelmed by those who fall trap to their primal needs, king among them, hunger. And really, who can blame them? Can anyone expect anyone to behave as decently as they would in a functioning society when faced with crippling hunger? And here is where the script expertly, if not subtly, delivers its message. The subtext is heavy throughout with various topics and themes like Trickle Down Economics, classism, capitalism, socialism, poverty, hunger, survival, and sacrifice. It’s all on the table, if you’ll forgive the pun.

It’s a bit unfortunate that THE PLATFORM falls apart a bit in the last act. Goreng and others become convinced that there is another way to survive without resorting to violence (and yes, cannibalism). They become consumed with the idea that if you can make it to the bottom level with a perfect piece of food in tact, you can send it up to the top as a symbol of human triumph and resilience. It’s not clear what this symbol will accomplish for them individually, and maybe that’s part of the point, but you have to think they hope for release in this act. But perhaps that’s my own self-interested human instinct bleeding through. What they find on the bottom level further muddies the metaphor, but gives some sense of conclusion that is bound to keep you thinking long after the film ends.

Overall, THE PLATFORM succeeds far more than not. It’s shot beautifully in its spareness. It’s perhaps the most grotesque cooking show challenge ever pitched. I expect this will become somewhat of a cult classic for its uniqueness and stomach churning violence. Even the act of eating makes one queasy to watch. That may not sound like a ringing endorsement, but to the contrary, while THE PLATFORM is difficult to watch, it’s also incredibly engaging. Part of that fun is in unlocking the secrets of the puzzle and the other part is in answering the hypothetical philosophical questions is raises in yourself. The latter may prove agonizing, but damn it’s a delicious ride.