Before I attempt to give my thoughts on the newest entry in the CRITTERS franchise, I need to make one thing very clear: I am a very big fan of these movies. Well, at least the first two, of which there are four. There is also a direct to streaming web-series that I’ll get into later as well. This fandom means that I can be forgiving in some areas regarding technical skill, performance, special effects (to a point), and budgetary constraints. Conversely, I expect the creators of a Critters movie made in 2019 to have a strong understanding of what I as a fan would respond to positively. So my “review” of this film is from that perspective and I want to make that bias known.

2019 has been a bit of a renaissance for us Critters fans. We had long heard rumors of a web series that Warner Brothers planned to put out on their short lived streaming platform. When that streaming service was shuttered, it was unclear what would become of the series, if anything at all. There was a large amount of buzz when THANKSKILLING and THE HEAD HUNTER director, Jordan Downey, made an audition film for the director job with his excellent short film, BOUNTY HUNTER. He seemed to understand the correct tone of the original CRITTERS film and judging by his own making of web-series, was clearly a fan himself. For reasons I need to one day understand, he didn’t get the job. I suppose fans should be lucky they got anything at all, but what we got wasn’t so great. Warner Brothers dumped the web series, CRITTERS: THE NEW BINGE, on the streaming service Shudder and it was immediately reviled for nearly every creative element, the worst being it’s overly crass and cringe-worthy attempt at humor. It was the farthest thing from what I, WE, the fans wanted. But there was hope! Rumors swirled that there was another CRITTERS something in the works for SYFY Channel. Then, via the Critters Unhatched Facebook fan group, more details began to leak. It seemed that there was definitely a new CRITTERS movie in the works. While expectations had been severely dampened by the recent NEW BINGE tragedy, there was still excitement that this new movie could give us fans what we’ve been waiting for. But before I get into that, maybe you’ve never seen a CRITTERS movie. What is all this about? I’m glad you asked.

In 1986, New Line Cinema released their answer to the GREMLINS craze with the original CRITTERS starring Dee Wallace (E.T.), M. Emmet Walsh, Scott Grimes, Billy Green Bush, Terrence Mann, Don Opper, Lin Shaye, and some guy named Billy Zane. Little monsters from space with an insatiable hunger for flesh escape space prison and invade the small fictional town of Grover’s Bend, Kansas. In pursuit are two shape shifting intergalactic bounty hunters with a penchant for destruction. The movie is the directorial debut of Stephen Herek, who would go on to make cult classics such as BILL & TED’S EXCELLENT ADVENTURE, DON”T TELL MOM THE BABYSITTER’S DEAD and Disney’s THE MIGHTY DUCKS. The result is a well scripted, well acted film with a delicate balance of horror and laughs. It has a Steven Spielberg inspired Amblin films pastiche anchored by the presence of Dee Wallace and a quaint rural small town setting. The nighttime cinematography and how it plays with light feels like something directly from E.T.

CRITTERS would be followed by a direct sequel, CRITTERS 2, with several returning actors two years later. The film took a more comedic, but still effective, approach. This, along with strong special effects, a bigger budget, and a sweeping, melodic orchestral score by Nicolas Pike made CRITTERS 2 one of the more enjoyable genre movie sequels and arguably better than its predecessor.It was also the directorial feature film debut of Mick Garris, known for his Stephen King TV adaptations and the anthology series MASTERS OF HORROR.

CRITTERS 2 would then be followed by two direct to video sequels shot back to back and released in 1991 and 1992. CRITTERS 3 is notable for the film acting debut of Leonardo DiCaprio while CRITTERS 4 starred the likes of Angela Bassett, Brad Douriff, and Eric DaRe (Leo from TWIN PEAKS). They are for hadrcore fans and curiosity seekers only, generally regarded as subpar at best.

So finally, after CRITTERS: A NEW BINGE and 27 years after the last feature length film in the series, we have CRITTERS ATTACK! making its world debut at the 2019 Fantasia International Film Festival. What we have is a movie that falls exactly in-between the good and the bad, but ultimately what I would consider a disappointment for fans and what would probably be an unsatisfying and confusing watch for those who have never seen a CRITTERS movies.

CRITTERS ATTACK! tries to thread the needle of appealing to both fans of the previous films while also making itself accessible to the casual viewer. This in itself is not a bad strategy, but unfortunately it fails on both counts due to a lazy script that attempts neither pursuit with much interest. But there are early signs that writer Scott Lobdell (HAPPY DEATH DAY) and director Bobby Miller (THE CLEANSE) understand what this movie should be. For starters, the nighttime scenes are shot with a bluish glow and halo light present in the aforementioned Amblin style of the original film. The farmhouse of the featured family of Drea (Tashiana Washington), her brother Phillip (Jaeden Noel), and Uncle is the very image of the Brown’s farmhouse from the original film and an early sign that the creators have the best intentions in mind. There is also a clever acknowledgment of the film’s roots by introducing a “good” Critter in the form of the adorable female Critter named Bianca who echoes GREMLINS beloved Mogwai, Gizmo. The tone of the film skews toward the comedic, and this works for the most part, But the comedic elements are hit or miss, with some jokes failing badly. However, there are some very funny moments. One particular scene comes to mind when a grade school aged character looks at his bare hands and his friends’ hands with weapons as they prepare for a final showdown with the Krite hoard.

The basic premise of the film is fairly familiar. An alien ship crash lands on earth with another in pursuit. The Krites multiply by attacking and eating humans, somehow multiplying in a manner that is not fully explained. Instead of a bounty hunter, this time a good, female Critter is the pursuit ship with a mission of stopping the Krite attack. This is where we there is more of a focus on appealing to a wider audience instead of giving the established fans what they want. In the original film, the motivation of the Critters is clear: escape space prison and feed. You’re given a movie’s worth of exposition in a short opening scene. None of that is even remotely clarified here. In fact, if you had never seen a CRITTERS film, at the end of ATTACK you would probably feel pretty confused as to the motives of these strange creatures. I found myself asking what is the point of this movie and who is it for? It’s not like there is a ton of money to be made in this franchise. Why not pander to the fans rather than make a movie that plays it so vaguely safe that no one is happy?

The movie follows the formula of the original but in a cloned, soulless sort of way. It lacks charm. The characters are likable enough, but the actors , like the filmmakers, don’t seem to have a handle on what type of movie they are making. And then there is the pandering. Dee Wallace makes her return to the franchise, not as Helen Brown, but as Aunt Dee (get it?). She’s a bounty hunter who has knowledge of the Krites and their movements and motivations, but absolutely none of this is even remotely explained to the viewer. We get zero backstory on this character. It’s the worst kind of referential nod to fans, while being totally agnostic for the uninitiated. I’m happy to see Dee Wallace in a CRITTERS film, but I won’t be condescended to. Why is she in this movie if she isn’t playing Helen Brown? And if there is a good reason for that, maybe do a better job of explaining why. 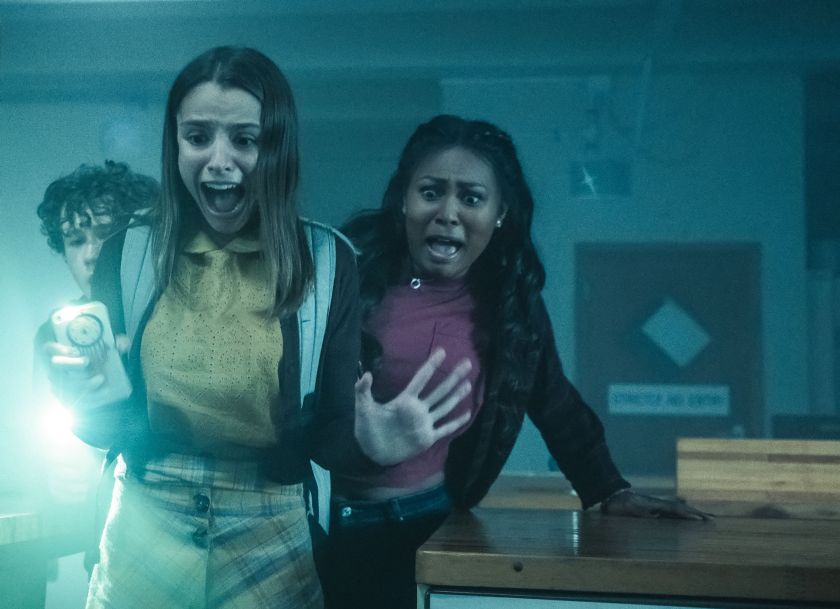 Still, there is a lot of fun to be had with this movie. Many of the young actors are having a blast and are written well enough. Washington as Drea carries the film most of the time, but still phones it in here and there. Every other joke lands but when they work, it’s pretty funny, however, none of these characters feel real; at least not like they do in Grover’s Bend. The original had a better sense of place. The town felt lived in and true to life, but much of that is forced in this latest entry.

I do want to shine a positive light on the puppetry work and special effects. Regardless of its budgetary constraints, the Critters moved, reacted, and behaved perfectly. I do wish that the Krites spoke to each other in subtitles. This would have helped explain their motivations and tied some of the comedic elements back to the original films. It’s inexplicable that CRITTERS ATTACK! would not employ this device even once.

So what we get with CRITTERS ATTACK! is something that not quite realizes what makes the first two films great, but is far superior in execution to the latter films and the abysmal NEW BINGE. It’s probably more than any of us fans could expect to get, but still, I can’t help but imagine what it could have been. Regardless, I support this film and will wait another 27 years for CRITTERS 6, but can we get Jordan Downey for that one? Please?