But you all know that, so let’s get to the quick little review I’ve cooked up, shall we? 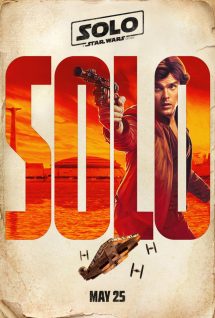 I’ve not seen Solo: A Star Wars Story yet.  What, you think I’m some sort of special guy who somehow got to see what’s like to be one of the bigger blockbusters of the year three days before release?  Pfffft.  No.  But I’m gonna review it anyway, though.

This movie probably has some stuff with Han Solo.  And Lando Calrissian.  And that lady who was really bad in the really bad Terminator: Genisys movie.  And Chewie seems to be hanging out.  Oh!  And Therm Scissorpunch is there.  That’s the super rad literal lobster dude playing space poker with Lando in the trailers.  I’m sure there are some plot holes created by rewrites or reshoots because someone on high said they wanted a different tone after the movie was all the way done.  I’m sure there will be some laughs and fan service stuffs.

You’re either going to like the movie or not – regardless of what I, or anyone else, thinks.  The end.

But regardless of how much you like it or not, you’re gonna find yourself in social media fistfights over it this weekend.  We’re going to be told we’re stupid, or called some sort of political term that is meant to be a put down, or find ourselves overly defending our own taste or opinion on a movie.

Let me repeat that.  We’re going to be on the offense, for or against, over our rightful opinion of 135 minutes of pop culture entertainment.

Let me say that in yet a different way…  People are going to fucking yell at each other over two hours and fifteen minutes of movie that not a single person on the planet is forced to watch.
So, I end this with a question I ask all adults to contemplate before they post their spew about how Star Wars sucks now or just a buncha SJW agenda or spend all your free time making “hard hitting, truth spouting” comments that just reveal that they feel pretty comfortable telling one of actresses or minorities or minority actresses that they hope they go die in a gutter on the official Star Wars Facebook page:  Have you asked a child what they think of the space movie with the pew pew pew and the zoom zoom of the space ships?

Yeah, I guessed probably not.  Go see the movie or don’t.  Enjoy it or don’t.  If it turns out not to be your thing, that’s perfectly cool.  If it is, that’s cool too.  Regardless, none of these movies were made for you alone so spending all your time telling anyone else why they are stupid for not liking it does not one person any good.

Just remember the one rule maybe more golden than that “do unto others” thing is simply the fact that “you can’t account for taste.”