On Black Friday, I stepped up to the concession stand of my local AMC Theatre and the young man behind the counter asked, “I gotta ask – are you a Marvel or a DC?”  This is a question that can be just as volatile and fight-inducing as “Are you a Democrat or a Republican?” or “Pepsi or Coke?”  But this kid, he seemed to be pretty well meaning and perceptive, simply asked because I was wearing a Flash t-shirt.  I explained to him that I grew up on Marvel Comics and was well within that camp when it comes to just about everything.  Again, the kid seemed pretty with it and, even though I didn’t ask, he spoke as if to agree with me after I gave my answer.  He asked if I was seeing Justice League and I confirmed I was.  I asked him if it he liked it. 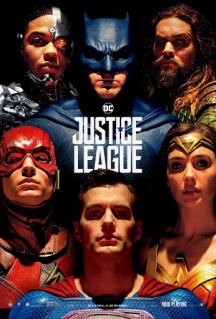 We didn’t speak again.  I wondered where this would go if the conversation was started up because I was wearing a Thor t-shirt and I was going to see Thor: Ragnarok.  I feel like it wouldn’t have come to a hard stop after giving a sighing “It’s alright” response.  I kinda feel like that would have exploded into an overflow of love and joy for the Marvel Studios movies.

Isn’t that how things go with these DC movies from Warner Bros.?  Don’t get me wrong, there are people who vehemently LOVE and vehemently HATE these movies, but the biggest reason that cause these movies to not be as successful here in the States as their Marvel counterparts are the people who just sigh, shrug, and say, “Yeah, I guess these movies are alright.”  I guess you can say those people are the swing voters – the ones who ultimately make the most difference.

I have no problem stating that I have serious complaints against Man of Steel and Batman v. Superman.  I don’t like the dark stylings brought to the Superman character by Zack Snyder.  No, I am not a Snyder hater either.  I very much enjoyed Dawn of the Dead, 300, and Watchmen.  I simply dislike the dour landscapes, drab colors, and muted feelings of hope brought to the DC Extended Universe, and the Superman-centric films in particular.  I don’t see superhero movies to be depressed about the world I live in.  I see those movies to see extraordinary beings with power and might saving us all.

Call me naive, but I don’t subscribe in the philosophical theory that you can sacrifice a few lives or ways of lives for the betterment of the majority when it comes to superhero movies.

But I’m not here to talk about those movies.  Shit, I spent a ton of my word count crapping on Snyder’s Superman movies.  I’d rather talk about Justice League, and, in particular, what I felt was good about a movie that didn’t set the world ablaze like WB hoped it would.

You see, I came out of Suicide Squad giving it a major pass because it was a fun two hours of escapism.  I gave Wonder Woman lots of love and favor for being smart and marrying the ideas of hope with the unsettling reality of war.  I lowered my expectations a great deal to watch Justice League, and I was better for it.  Instead of trying to find what went wrong (i.e. messy story, mix of Snyder style seriousness vs. Joss Whedon style comedic character quirks, bad villain, and Superman’s weird upper lip that I couldn’t really see the issue people had with it), I decided to find what was good about it.

Sure, I could probably spend a thousand words on how the Flash in this movie is not Barry Allen, but Wally West in portrayal, or how Jason Momoa doesn’t quite fit the Aquaman character we all know, or how there are a billion other Apokolips New Gods you could choose over Steppenwolf because he sucks in general (even in the comics, he sucks – you know it is true), but I want to talk about the good things.

First, “Barry Allen”… or Barly Weslen as I will call him… is perfectly fine.  Ezra Miller is a young guy playing a fresh-off-getting-his-powers hero and he’s a little over his head already.  Sometimes the comedy is a bit much for the situation, but I was generally fond of his character and what he brought to the movie.

Second, I REALLY appreciated how the movie kept moving and set a brisk pace.  It’s two hours on the nose and didn’t need another minute to do stuff.  That may also lend to other issues with a cookie cutter plot, but I wasn’t bored and nothing was getting bogged down with pointless other things crowding the plot.  I also appreciated how I could follow the action scenes.  They were well coordinated and shot and didn’t make me wish the camera could zoom out so I can see where I am and what I am supposed to care about.

Third, I enjoyed how the characters interacted.  Wouldn’t you know it, they actually seemed to like each other!  Yeah, Batman’s a dick and gets called out on it a few times, but it seems like everyone believes in one another.  Batman coaching Flash to save just one hostage in a crucial action scene was wonderful.  Sure, Aquaman is a big oaf of a dude, but you can’t help but be charmed by him because you realize you aren’t watching a great (or even a good) movie, but you are watching a fun movie.  Also, I kinda think I might be in love with Gal Gadot’s Wonder Woman – and she’s treated lovingly in this movie.

Speaking of characters, I loved how there was an honest attempt to merge development and growth into the characters.  Batman is learning how much the world does need a Superman.  Wonder Woman is coming out of hiding to protect a world she turned her back on.  She’s helping Cyborg who is a frustrated half-human Frankenstein monster type of misfit who doesn’t know where he fits.  Aquaman is learning to defend both the surface world and Atlantis (though it’s a little thin here but I see what they are going for).  Barly Weslen is learning how to not be alone and aimless.

Finally, way to go on making Superman a beacon of hope finally.  I actually believe he will save us instead of burn our cities to the ground.  For the most part, DC, you’ve given some attempt to right the course and bring your heroes out of a shadowy anti-hero hellscape.  See?  It ain’t so bad to have a sense of humor.

In all, I give Justice League three-and-a-half Aquaman yelling “Yeah!” out of five.